The U.S. Supreme Court ruled in Star Athletica v. Varsity Brands, that decorative elements of a cheerleading uniform are protectable by copyright law, a ruling the Court said was aimed at resolving “widespread disagreement” on when such designs are eligible for protection. The decision bolsters the legal protections for pictures, sculptures and graphic designs. The case examined the limits of copyright protection for clothing, furniture and other useful items that can have both functional and distinctive ornamental aspects. The Court reasoned that the cheerleader uniform design met the test of being able to “exist as its own pictorial, graphic, or sculptural work” and that it was eligible for copyright protection when it was separated from the utilitarian article. The ruling could have expansive implications for designers in the fashion industry, who seek to protect ornamental designs that are affixed on useful articles like clothing.

Firm Partner Oliver A. Ruiz and the Rotary Club of Miami to Celebrate at Their 100th Anniversary Gala

The firm congratulates firm Partner Oliver A. Ruiz and the Rotary Club of Miami on their celebration of the club’s 100th Anniversary at its Century of Service Gala. http://hrld.us/2o443fe 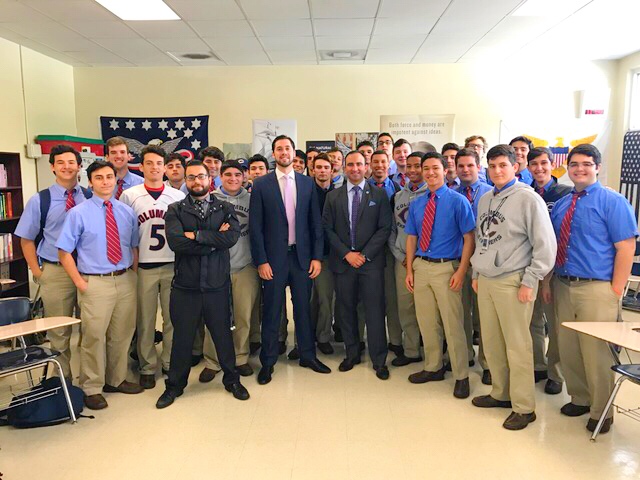 Inter Partes Review is a proceeding that the USPTO adopted in 2012 that allows a challenge to an issued patent based on obviousness or lack of novelty. Inter Partes Review has become an increasingly common tool to invalidate a patent as an alternative to litigation in Federal Court. In Covidien LP v. University of Florida Research Foundation Inc., the US Patent Trial and Appeal Board addressed the issue of whether sovereign immunity would extend to a state actor who owns rights to a patent being challenged in an administrative forum such as an Inter Partes Review. Under the 11th Amendment of the U.S. Constitution, the 50 States of the Union and their branches, have immunity from a lawsuit instituted by a private party. Court decisions interpreting the 11th Amendment have construed it broadly to extend this immunity not only to lawsuits in a court of law, but also to other adjudicative proceedings such as those of administrative agencies.

An Inter Partes Review in many way parallels a lawsuit in a court of law. For example, there is discovery, depositions, motions, and oral argument. Further, a panel of judges decide not only the outcome of the proceeding, but also whether the proceeding may even be instituted. In Covidien LP v. University of Florida Research Foundation Inc., the U.S. Patent Trial and Appeal Board ruled in favor of the University of Florida Research Foundation. The U.S. Patent Trial and Appeal Board decided that due to the similarities between civil litigation and an InterPartes Review, the University of Florida Research Foundation, being an arm of the State of Florida, was entitled to assert sovereign immunity as a defense to the institution of an Inter Partes Review.  This decision may have an effect on the number of Inter Partes Reviews that are instituted against public research institutions, such as state universities.

In a recent opinion narrowing the international reach of U.S. patent laws, the United States Supreme Court overturned the Federal Circuit’s determination that shipping a single part of a patented invention, to be joined with other components overseas, can constitute infringement.

In Life Techs. Corp. v. Promega Corp., No. 14-1538, Life Technologies manufactured an enzyme to be used in a DNA analysis kit, and shipped the enzyme to London where the company proceeded to manufacture the remaining components of the toolkit.  Promega Corp. filed suit, alleging patent infringement due to Life Technologies’ supplying the single component for genetic testing from the United States to the United Kingdom.  In reversing the district court’s order granting Life Technologies’ motion for judgment as a matter of law, the Federal Circuit held that certain circumstances can impose liability on a party under 35 §271(f)(1) for “supplying or causing to be supplied a single component for combination outside the United States.”

The Supreme Court reversed the Federal Circuit, and after engaging in a statutory construction of the plural term “components,” held that merely supplying a single component does not constitute infringement under Section 271(f)(1).  In the decision for the high court, Justice Sotomayor wrote that the governing statute does not apply to the quality of components, rather the quantity:  “We hold that the phrase ‘substantial portion’ in 35 U. S. C. §271(f )(1) has a quantitative, not a qualitative, meaning. We hold further that §271(f )(1) does not cover the supply of a single component of a multicomponent invention.”

While the scope of 35 §271(f)(1) remains subject to further litigation, specifically vis-à-vis how many components would constitute “a substantial portion,” Life Technologies makes clear that a party cannot be liable under 35 §271(f)(1) due to the extraterritorial supply of a single component.

The Supreme Court recently held in SCA Hygiene Products Aktiebolag v. First Quality Baby Products, LLC that the defense of laches cannot be invoked against a claim for damages brought within the statutory six-year limit. The decision comes at little surprise given the Court’s ruling in Petrella v. Metro-Goldwyn-Mayer, which considered a similar provision of the Copyright Act. The Court reasoned that Congress set forth an express limitations period in the patent laws, and giving effect to laches within the statutory period would amount to judicial overriding. In his lone dissent, Justice Breyer noted that the decision ignores the application of laches to reign in abusive pre-litigation conduct by a patent holder who unreasonably delays suit, knowing he can collect damages for the previous six years of infringement.