The U.S. Copyright Office states that the new Copyright Claims Board (CCB) will be available to hear claims by December 27, 2021.[1]

The CCB will serve as a nationwide “small claims court” for copyright infringement lawsuits claiming no more than $30,000 in damages. The CCB will not replace federal district courts, which means copyright owners will still be able to bring such “small claims” copyright infringement lawsuits before federal courts. Complainants will not be required to bring claims to the CCB instead of federal courts, and Respondents who are served a claim can opt out of the CCB’s jurisdiction.

However, the Copyright Office intends to create streamlined procedures that would make the CCB a less expensive venue for litigation than a federal district court. 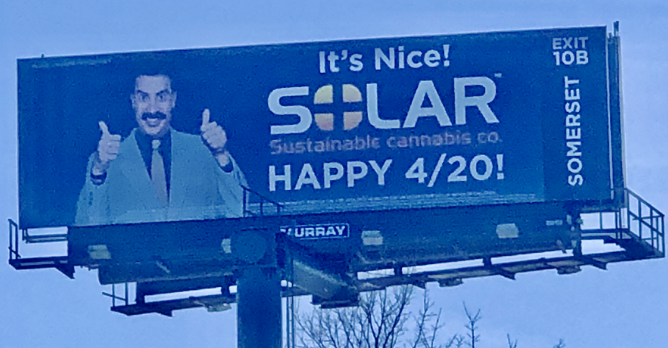 On July 12, Sacha Baron Cohen (“SBC”)—English actor and comedian known best for his roles as Brüno Gehard, Admiral General Aladeen, Ali G, and Borat Sagdiyev—and his company, Please You Can Touch, LLC (“PYCT”) filed suit against Edward Dow III and Solar Therapeutics, Inc. (collectively, the “Defendants”) for, inter alia, copyright infringement of PYCT’s copyright of the Borat character. Specifically, the complaint alleges that Defendants’ use of a billboard with the “portrait, picture, image, likeness, and persona” of SBC and his famous character Borat Sagdiyev was unauthorized and done intentionally to cash in on the character’s fame and falsely represent that SBC had endorsed Defendants’ cannabis products.

The lawsuit was filed almost three months after SBC’s attorneys sent a cease-and-desist letter to Defendants, who promptly took down the billboard. In addition to seeking a permanent injunction enjoining Defendants from using SBC’s “portrait, picture, images, likeness, [and] persona,” the complaint requests relief by way of trebled statutory damages, actual and punitive damages, and disgorgement of profits attributable to the allegedly infringing billboard.

College Athletes Can Now Profit From Their Name, Image, and Likeness (NIL)

The National Collegiate Athletic Association (NCAA) is a non-profit organization that has long regulated the manners in which student-athletes may be compensated by their colleges and universities for playing on “amateur” collegiate-level sports teams. The term “student-athlete” was coined in the 1950’s by Walter Byers, the NCAA’s first executive director, and it has been used in the industry and by courts to describe these players ever since. While student-athletes have historically received scholarships, the NCAA has essentially prohibited student-athletes from receiving benefits beyond the cost of education. These restrictions have also included the inability of student-athletes to profit from their name, image, and likeness pursuant to their scholarship agreements. Name, image, and likeness (“NIL”) is an intellectual property right that protects against the misappropriation of an individual’s name, image, and likeness for commercial benefit. Such NIL limitations have been a major source of conflict between the NCAA and student-athletes, with the NCAA maintaining the upper hand over the years. However, the tides just turned.

In NCAA v. Alston, a 2021 antitrust class action lawsuit filed by current and former student-athletes against the NCAA, the U.S. Supreme Court reviewed a challenge to the NCAA’s student-athlete compensation rules. Specifically, the student-athlete class argued that the NCAA’s rules were in violation of § 1 of the Sherman Antitrust Act, 15 U.S.C. § 1, which prohibits “contracts, combinations, or conspiracies in restraint of trade or commerce.” A unanimous Court reviewed “only the subset of NCAA rules restricting education-related benefits” and found the NCAA in violation of the Sherman Act on June 21, 2021. Notably, the Court highlighted the “uncontested” fact that the NCAA “enjoys monopsony control in the relevant market–such that it is capable of depressing wages below competitive levels for student-athletes and thereby restricting the quantity of student-athlete labor.”

Even before NCAA v. Alston, however, several states had legislation in the works on the issue of student-athletes profiting in the NIL sphere. For example, California passed the Fair Pay to Play Act in September 2019 and Colorado adopted a similar law in March 2020, both of which were set to become effective in 2023. Florida was the third state to pass NIL legislation, but its bill had a much earlier effective date of July 1, 2021. However, in the wake of NCAA v. Alston, the NCAA announced an “interim” NIL policy on June 30, 2021, allowing student-athletes to “engage in NIL activities that are consistent with the law of the state where [their] school is located.” Now, student-athletes in some states can monetize their social media platforms, sell merchandise and autographs, and enter into endorsement deals subject to certain limitations set by their schools. This will make way for student-athletes to create their own brands by filing trademark applications.

The German sportswear brand Adidas has long defended its famous stripes trademark, having filed over 40 lawsuits in the past against the likes of Abercrombie, Skechers, J. Crew, and Target, among others.  Adding to that list, Adidas recently brought suit against Thom Browne (“TB”) for trademark infringement and dilution in the Southern District of New York, alleging that TB is “selling athletic-style apparel and footwear featuring two, three, or four parallel stripes in a manner that is confusing similar to Adidas’s three-stripe mark.”  The federal complaint comes on the heels of an unsuccessful mediation between the parties dating back to November 2020.  TB countered the allegations in the complaint by contending that Adidas consented for over 10 years and is now changing its mind over TB’s striped apparel and footwear.

The U.S. Patent & Trademark Office is drafting rules for two new proceedings that will be available to the public by December 27, 2021: Expungement proceedings and Reexamination proceedings.[1]

In the future Expungement proceedings, third parties will be able to request cancellation of some or all of the goods or services in a registration because the registrant never used the trademark in commerce with those goods or services.

In the future Reexamination proceedings, third parties will be able to request cancellation of some or all goods or services in a registration on the basis that the trademark was not in use in commerce with those goods or services on or before a particular relevant date.

The USPTO believes that these new proceedings will give U.S. businesses “new tools to clear away unused registered trademarks from the federal trademark register.” 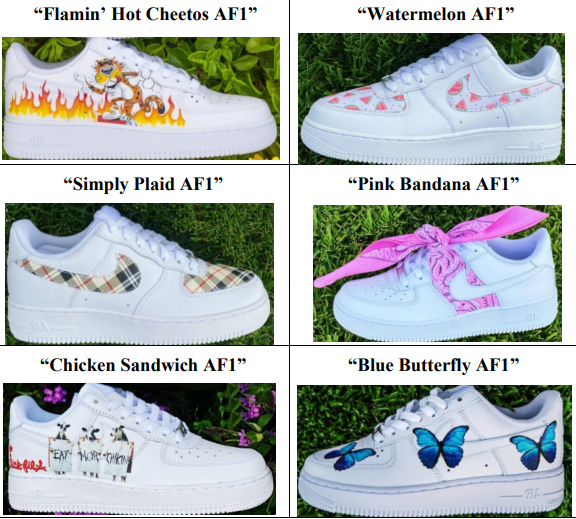 On July 19, 2021, Nike filed suit against Customs by Ilene, known for doing business as Drip Creationz, in the Central District of California for trademark infringement, counterfeiting, dilution, false designation of origin, and unfair competition. Drip Creationz went viral for their customized “Nike Air Force 1” sneakers after that particular shoe, which was originally released by Nike in 1982, enjoyed a major comeback in street fashion during 2019 and 2020. With over one million Instagram followers, Drip Creationz has enjoyed widespread popularity amongst Millennials and Gen Z, especially due to promotion from prominent so-called “influencers” on social media.

Despite Drip Creationz’s claim that it sells “100% authentic” Air Force 1 sneakers, Nike alleges that their shoes are counterfeits of “sub-par quality.” Nike’s claims are not only limited to the sale of allegedly counterfeit shoes, however, but also go to “the core of Drip Creationz’s business–its ‘customizations.’” Specifically, Nike contends that the “images, stitching, materials, and/or colorways used by Drip Creationz are not and have never been approved, authorized, or offered by Nike.” Even further, Nike alleges that some of Drip Creationz’s customizations involve “deconstructing Air Force 1 shoes and replacing and/or adding material on the shoe, including fake and unauthorized Nike Swoosh designs as well as third party trademarks and protected images.”

General Motors’ “Super Cruise” features semi-automated driver assistance technology that allows a driver to employ hands-free driving while all on the highway. General Motors recently brought suit against Ford, alleging that Ford’s “BlueCruise” name – a hands free highway driving system – was too similar to that of GM’s Super Cruise trademark. The lawsuit was filed in the Northern District of California, and claims that Ford’s decision to use BlueCruise will inevitably cause confusion and a false association between the two companies. A Ford spokesperson has called the claim “meritless,” and asserts that the term “cruise” is a common and well known term in the industry. For its part, GM is seeking monetary damages and an injunction pertaining to the “BlueCruise” mark, and claims that because attempts to resolve the dispute amicably were unsuccessful, GM was left with no option but to protect its brand.

The United States Patent & Trademark office (USPTO) is running a study on patent eligibility jurisprudence in the United States, and how the current jurisprudence has impacted investment and innovation.[1] The USPTO is particularly interested in the impact on the following technologies: quantum computing, artificial intelligence, precision medicine, diagnostic methods, and pharmaceutical treatments.

The USPTO is accepting comments until September 7, 2021. All comments must be submitted through the Federal eRulemaking Portal at www.regulations.gov and all comments will be made available for public inspection.[2] 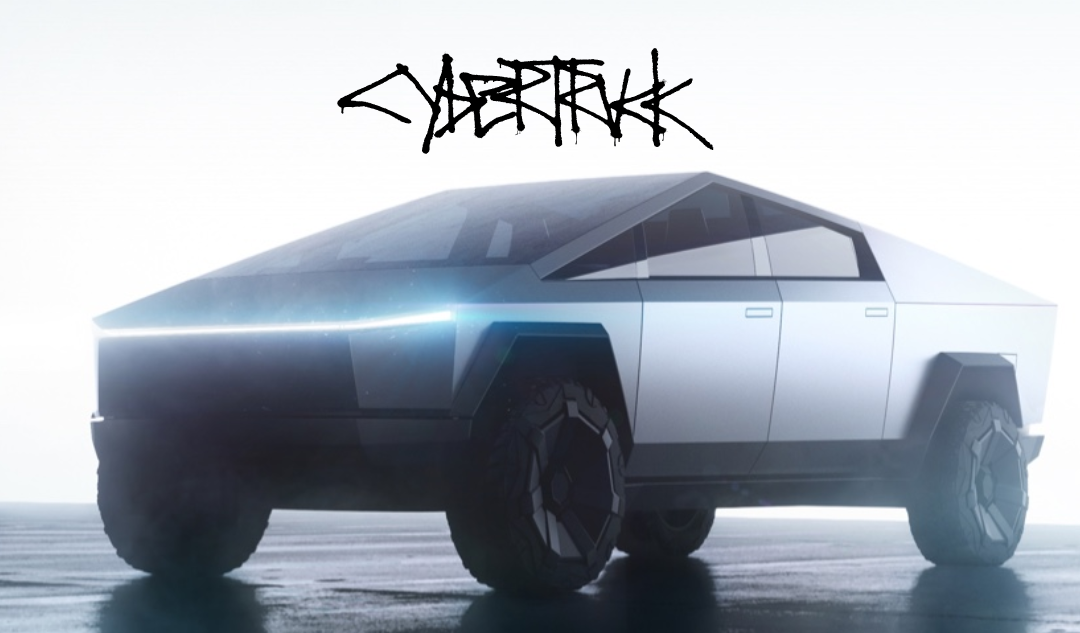 Yesterday, the USPTO granted Tesla, Inc. a design patent for the ornamental design of the Cybertruck, Tesla’s all-electric utility vehicle. Since the prototype’s unveiling in November 2019 at the Tesla Design Studio in Los Angeles, the Cybertruck has generated a substantial amount of buzz due to its unique appearance. The patent application for the design of the vehicle’s body was filed the same day as the Cybertruck’s reveal, and the corresponding registration has a term of fifteen years. While the Cybertruck is not expected to enter production until later this year, prospective buyers can make a $100 deposit towards purchasing the vehicle on Tesla’s website today. 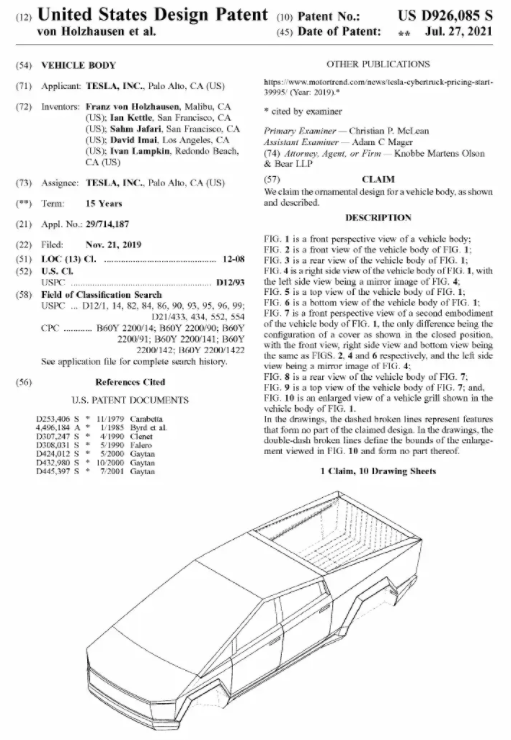