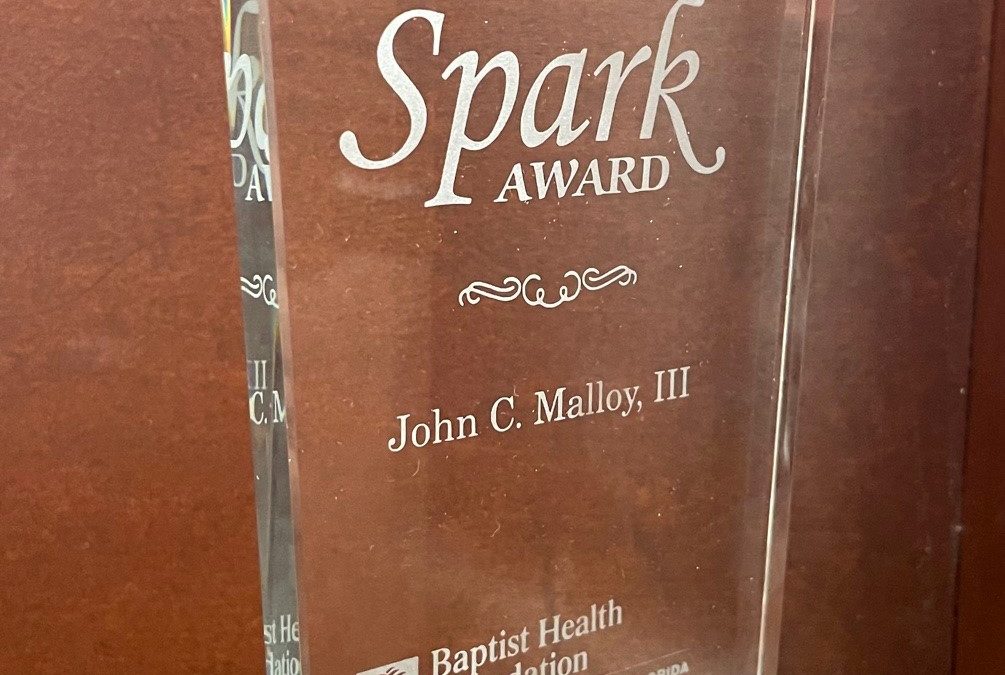 In recognition of exemplary philanthropic service, the Baptist Health Foundation honored Firm Partner, John Cyril Malloy, III, with the prestigious “2021 Spark Award.”  The Foundation raises funds to deliver cutting-edge healthcare to South Florida by supporting Baptist Health South Florida’s network of 12 hospitals and specialized institutes from Boca Raton to the Florida Keys.  Unbeknownst to many, Baptist Health South Florida is a true non-profit that relies overwhelmingly on generous donors and grateful patients to render indigent and reduced-cost care throughout our communities, attract world-class medical talent to South Florida, build and modernize award-winning facilities in our very own neighborhoods, and seed the innovation of its healthcare professionals from new medical devices to innovative treatments.  Mr. Malloy has been a member of the Foundation board since 2017 and – especially throughout the Covid-19 pandemic – he has worked tirelessly to “spark” that vital philanthropy.  If you would like more information on how you can support the Baptist Foundation, including the many benefits of becoming a member of the Giving Society, please contact Mr. Malloy directly. 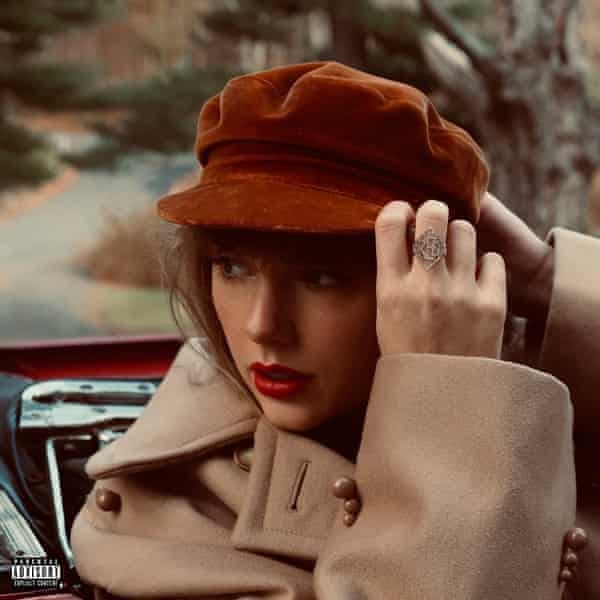 The music industry is abuzz this week due to Taylor Swift’s tactical re-release of her hit album, Red, as Red (Taylor’s Version). From 2005 to 2018, Swift was signed with Big Machine Records, the record label under which she skyrocketed to stardom. The thirteen-year contract provided that Big Machine would own the masters, or the original recordings, for the songs on Swift’s albums, which ultimately included those on: Taylor Swift (2006), Fearless (2008), Speak Now (2010), Red (2012), 1989 (2014), and Reputation (2017). On the other hand, Swift, who is famous for penning and composing her own love songs, retained the rights to her original lyrics and melodies under the agreement.

Swift left Big Machine for Universal’s Republic Records in 2018, and ensured that she secured the ownership of her future masters under the new contract. Then, in a move that shocked the music industry, Big Machine was quietly acquired in 2019 by Ithaca Holdings, a private equity group owned by Scooter Braun. Swift was unaware that her masters would fall into the hands of Braun, with whom she publicly had bad blood. Swift responded to the sale by calling Braun an “incessant, manipulative bully.” In the aftermath, there were attempts to block Swift from using the masters of her own songs, such as in her performance at the 2019 American Music Awards and in her Netflix documentary Miss Americana.

Equipped with her remaining rights, Swift resolved to re-record and re-release the albums she created under Big Machine in an attempt to regain control of her music. The re-recorded albums bear the same names as the originals, but each are marked as (Taylor’s Version).

Since 2018, roughly 600 applications for registrations of trademarks for non-fungible token (“NFT”) goods and/or services have been filed with the United States Patent and Trademark Office (“USPTO”). This year, however, has seen a tremendous rise in NFT-specific applications, signaling an even stronger push towards the digital asset that can be used to prove ownership of digital files such as photos, videos, and audio files.

Accordingly, consumers can expect to engage with more virtual projects in the new year, particularly within the beauty and fashion industries.

The social media giant Facebook recently announced a name change to “META,” as it shifts its focus to the “metaverse.” This rebranding effort is purportedly aimed towards expanding its business activities towards virtual and augmented reality technologies, among other things. However, one potential roadblock for Facebook and its filing of a trademark application for META, is a company called META PC, LLC, which submitted an August 23, 2021 trademark application for the word mark “META” in connection with computers, laptops, portable computers, tablets, and computer peripherals – all goods and services that are arguably in the realm of Facebook. Although META PC, LLC’s application has not yet matured into a registration for the “META” mark, founders Joe Darger and Zach Shutt are allegedly offering to abandon their quest and rebrand their entire company, in exchange for $20 Million. Leaving aside the money, META PC, LLC is purportedly reaping the rewards of the publicity, having seen an uptick in follows by approximately 5,000 %.

Digital Images of Dead USPTO Trademarks for Sale as NFTs

Recently, a non-fungible token (NFT) collection named Dead Trademark Agglomeration launched on OpenSea, the NFT marketplace valued at $1.5 billion. This collection claims to be the “first and only NFT collection dedicated to collecting and preserving unique dead trademarks. Each NFT is based on actual historical U.S. trademark records from a past trademark registration.” This collection gives owners the “chance to stake a claim to a unique part of history”, but ownership “does not confer or assign any trademarks rights.” Accordingly, purchasers of these NFTs would simply own a screenshot of a dead trademark on the Principal Register, presumably taken from the USPTO platform, as a digital image file.

To date, the Dead Trademark Agglomeration collection consists of 135 NFTs owned by 112 users. The current floor price stands at 0.01 ETH, which roughly amounts to $43.00. Some of the dead trademarks for sale include FLEXY PUZZLE, RIB TICKLERS, POURMASTER, and TOWN CRIER. There is also a higher priced, limited “Meta Collection” comprising of ten dead trademarks incorporating the word META. 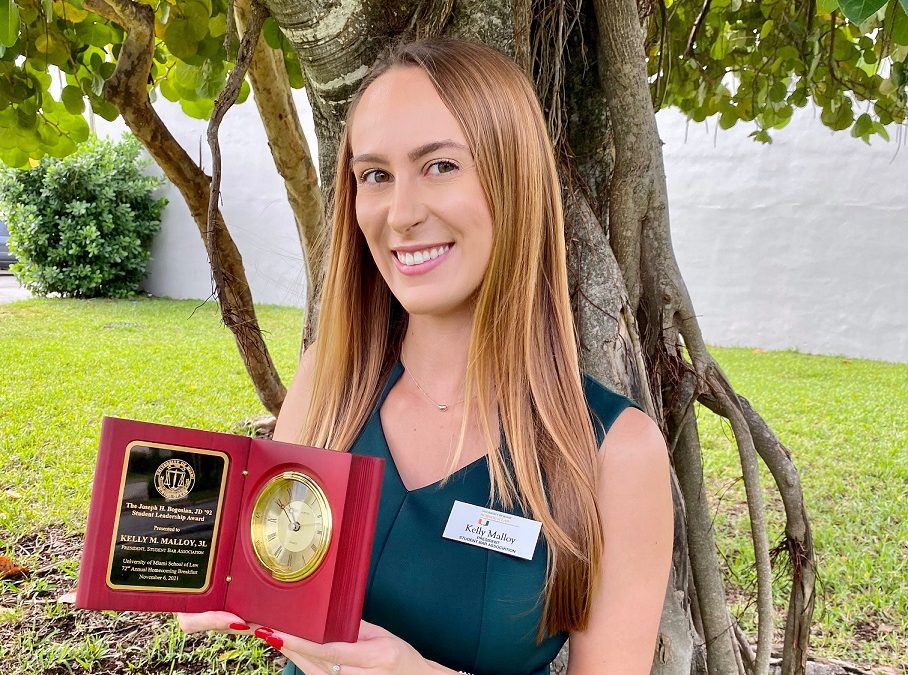 The Firm congratulates Kelly Malloy, Patent Engineer and Law Clerk, on her selection as this year’s recipient of the Joseph H. Bogosian Student Leadership Award from the University of Miami School of Law Alumni Association. The award was presented to Ms. Malloy at Miami Law’s 72nd Annual Homecoming Breakfast for her service as President of the Student Bar Association.

Senior Associate W. John Eagan recently put a stop to an email fraud scheme with a favorable result under the Uniform Domain-Name Dispute-Resolution Policy (“UDRP”). Unknown bad actors registered a domain name which was confusingly similar to a domain used by one of the Firm’s clients, whereby the fraudsters substituted the “.com” domain of the legitimate website with “.co” for its scheme. The spurious domain was then used to send fraudulent emails to the client’s customers, posing as actual employees of the client, the only difference in email address being the surreptitious switch from “.com” to “.co” at the end of the address. The intent of the scheme was to provide alternative banking details in the hopes that the client’s customers would not notice the change in email domain, and would begin sending payments to the new bank coordinates.

While the victims of any such crimes should first and foremost report the fraud to the proper law enforcement authorities, the firm was able to counsel a relatively simple and effective solution to help ensure that the fraudulent activity did not continue. A successful complaint under the UDRP can result in transfer of the disputed domain name to the complaining party. So while the imposters may reside outside the jurisdiction of the proper authorities, without access to or control of the domain name, it can no longer be used to perpetrate email fraud.

The Firm routinely counsels its clients on cost-effective and practical solutions to intellectual property issues from its offices in Miami, Boca Raton, and Jacksonville.