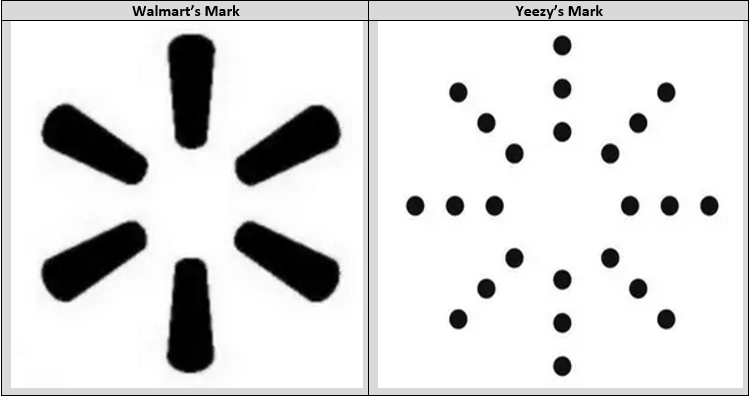 Last month, Walmart Apollo, LLC (“Walmart”) filed a Notice of Opposition (“Notice”) at the U.S. Patent and Trademark Office (“USPTO”) against Yeezy, LLC (“Yeezy”), famed producer and rapper Kanye Omari West’s fashion brand, on the basis of, inter alia, a likelihood of confusion between Yeezy’s applied-for mark (“Applicant’s Mark”) and Walmart’s registered “spark” mark (“Protected Mark”). Walmart argued that its consumers would likely be confused as to the source or origin of Yeezy’s goods or services when viewing Applicant’s Mark, and this confusion would thus damage Walmart and any goodwill contained within its Protected Mark.

In the summer of 2020—almost a year before Walmart filed its Notice and only months after Yeezy had filed its intent to use application—and again in the early months of 2021, Walmart’s representatives reached out to Yeezy regarding the prospective issue, but the corporation claims it did not receive enough useful feedback to refrain from filing its Notice. Walmart, who has been using its Protected Mark since 2007, “remain[s] hopeful [that it will] . . . hav[e] productive discussions [with Yeezy] around Yeezy’s proposed use of” Applicant’s Mark.[1] Yeezy, recently valued somewhere between $3.2 billion and $4.7 billion[2] and solely owned by Kanye West, has not yet issued a statement.

The images above are provided in Walmart’s Notice filed with the USPTO on April 21, 2021. The Notice can be found at the following link:  https://ttabvue.uspto.gov/ttabvue/v?pno=91268856&pty=OPP&eno=1