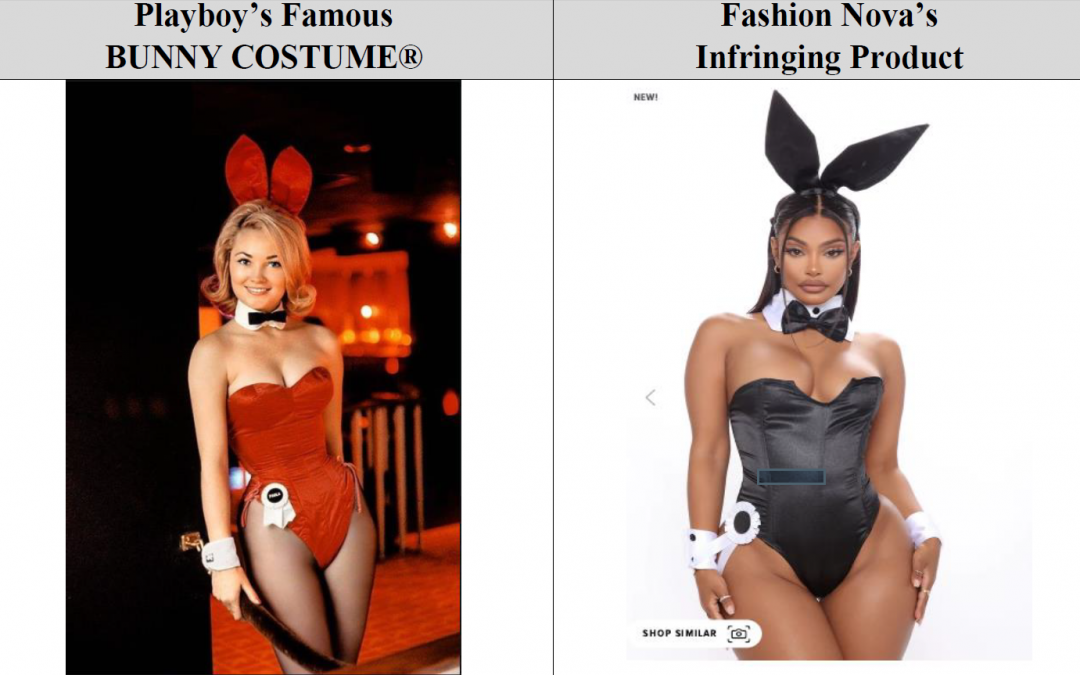 Since its start in 1953 as an American men’s lifestyle and entertainment magazine, Playboy has become one of the most recognizable and well-known brands worldwide. Throughout the years, Playboy Enterprises International, Inc. (Playboy) has applied for over 50 trademarks at the United States Patent and Trademark Office in connection with its brand. Who can forget the iconic silhouette of the tuxedo-wearing Playboy rabbit mascot? One of Playboy’s most notable and renowned symbols is that of the “bunny costume” first worn by Playboy Bunnies, waitresses at a Playboy Club, in the 1960s. The bunny costume was inspired by Playboy’s tuxedo-wearing rabbit mascot and consisted of a strapless corset, wrist cuffs, a collar, a bow tie, and its infamous bunny ears and tail. Many celebrities such as Kate Moss, Debbie Harry, Jenny McCarthy, Anna Nicole Smith, Holly Madison, Pamela Anderson, among others, have sported this iconic costume. The bunny costume™ design is even federally protected, see Reg. Nos. 3,353,308, 3,234,488, and 3,319,643.

With this type of heightened popularity, trademark infringement issues can arise as others attempt to profit from the success of a brand. Just one quick search on Google for “playboy bunny Halloween costume” displays a multitude of links for knock-off, imitation, and lookalike bunny costumes. As such, Playboy recently filed a trademark infringement, dilution, and unfair competition 22-page complaint in the U.S. District Court for the Central District of California against Fashion Nova, Inc., a fast fashion retail company who has previously been sued for copying copyrighted designs, trademarks, and trade dress elements of well-known designers. See Playboy Enterprises v. Fashion Nova, Inc., 2:20-cv-09846 (C.D.Cal); See also Gianni Versace S.r.l. v. Fashion Nova, Inc., 2:19-cv-10074 (C.D.Cal). More than just selling lookalike costumes in direct competition with Playboy, Playboy alleges that Fashion Nova attempts to confuse and mislead consumers about an association between the infringing product and Playboy, through its “willful misappropriation” of Playboy’s trademarks, and to trade off of Playboy’s goodwill and reputation. Playboy further alleges that Fashion Nova is advertising these infringing products using the description “Bunny of the Month,” which is “a clear and unauthorized reference to Playboy’s famous PLAYMATE OF THE MONTH trademark,” used in connection with the Playboy brand since the mid-1950s. See Reg. No. 3,388,248. Playboy also alleges that Fashion Nova’s “failure to implement appropriate quality controls further diminishes the value of the trademarks.”

Playboy seeks injunctive relief and monetary damages; however, Playboy ultimately seeks to protect its nearly 70 year old famous brand, and related trademarks. It is relevant to highlight that Playboy’s once powerful mark could be at risk of becoming a descriptive term sometime in the future due to the substantial use of the word “Playboy” to describe a bunny costume with identical or highly similar features as those belonging to Playboy. Happy Halloween!