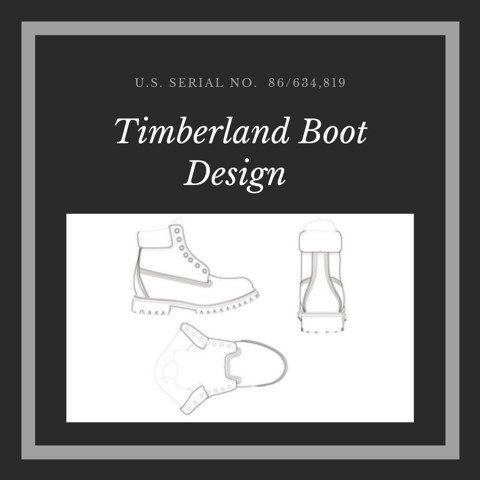 Recently, the U.S. PTO’s Trademark Trial & Appeal Board (“TTAB” or “Board”) affirmed the refusal to register the Timberland Boot Design on the basis that the mark’s drawing lacked acquired distinctiveness.

The Timberland Boot, invented in 1973, is outdoor footwear known for its yellow color.  By the late 90s, the Timberland Boot became a cultural icon and fashion statement through its association with musicians, athletes, and other celebrities.  In 2015, TBL Licensing LLC (“TBL”) sought protection of the Timberland Boot Design in the form of a Federal Trade Dress Application.  See U.S. Serial No. 86/634,819 for use in connection with “footwear, namely, lace up boots” in International Class 025 with a first use date of December 01, 1988.  After receiving six Office Actions refusing registration of the design, TBL filed a Notice of Appeal with the TTAB on December 04, 2018.  Nearly 2.5 years later, the Board affirmed the Examining Attorney’s refusal to register the Timberland Boot Design on the basis that the mark’s drawing lacked acquired distinctiveness.  See image.  In the Appeal, TBL had the burden to prove that the product design sought to be registered was perceived by relevant consumers not just as the product (or features of the product), but as identifying the producer or source of the product.  In affirming the Examining Attorney’s refusal, the Board referred to the Converse factors to determine whether TBL’s evidence supported a finding of acquired distinctiveness.  See Converse, Inc. v. Int’l Trade Comm’n, 907 F.3d 1361, 128 USPQ2d 1538, 1546 (Fed. Cir. 2018) (“(1) association of the trade[mark] with a particular source by actual purchasers (typically measured by customer surveys); (2) length, degree, and exclusivity of use; (3) amount and manner of advertising; (4) amount of sales and number of customers; (5) intentional copying; and (6) unsolicited media coverage of the product embodying the mark.”).

In its analysis, the Board found TBL’s declaration testimony had little probative value on the issue of acquired distinctiveness because the declarations did not come from average consumers but retailers for these boots.  The Board also found the evidence of celebrities wearing the Timberland boots “demonstrate[d] the popularity of Applicant’s lace-up boots, but [did] not show that the celebrities wearing the Timberland boots associate[d] Applicant’s claimed trade dress with the source of the boots they are wearing.”  While TBL demonstrated over 30 years of continuous use of its applied-for product trade dress, the Board determined that the record showed TBL’s use was not “substantially exclusive” given the numerous third-party uses and lack of efforts by TBL to police its product design. TBL introduced evidence that it sold more than 15 million pairs of boots over the last 15 years, amounting to at least $1.3 billion in revenue, and spent $1.5 million on marketing and adverting its lace-up boots bearing the applied-for trade dress from 2011-2016.  While the Board found TBL’s sales figures impressive, there was little evidence that the “features which Applicant claim[ed] as its mark – the bulbous toe box, ankle collar, outsole shape and color, rear heel panel, vamp from back to front, and eyelets – have been advertised, or are recognized, individually or collectively as source indicators for the identified lace-up boots.”  Finally, the Board determined that while the record was replete with evidence of unsolicited media coverage of TBL’s Timberland boot, “such coverage [was] insufficient to establish acquired distinctiveness, because there [was] simply no evidence that the media coverage and celebrity usage [] focused on the product trade dress Applicant seek[ed] to register.”  After considering all of the evidence relevant to the Converse factors, the TTAB concluded that TBL did not establish that its proposed product design had acquired distinctiveness as a source identifier in connection with its lace-up boots.